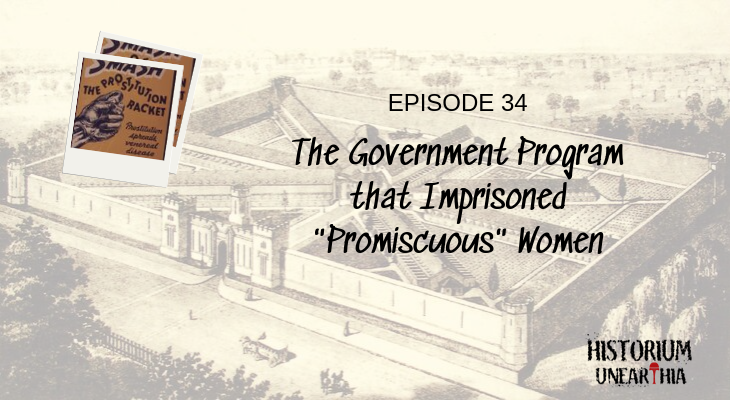 In the United States, the war against women took a particularly dark and secretive turn in the early 1900s—around the start of World War I. Under a government-sponsored “social hygiene” campaign, to protect newly recruited soldiers, tens of thousands of women were arrested on “suspicion” of having a venereal disease. Sex workers were the prime targets, but any woman who raised an eyebrow could be apprehended. The women were subjected to invasive gynecological examinations. If they tested positive for an STI, they were incarcerated in hospitals, reformatories, and prisons, without any semblance of due process.

Once imprisoned, the women became test subjects—receiving painful injections of mercury and other ineffective treatments. Many were beaten and forcibly sterilized. Most were held indefinitely until they were deemed “cured” or “reformed.” The program persisted for decades, well into the 1950s, and even shades of this discriminatory practice are present today.

Have you ever heard of the American Plan?

It was an absolute pleasure to speak with Scott Stern, author of The Trials of Nina McCall, the first book-length history of the American Plan, and Jeana Jorgensen, a scholar and sex educator who has written extensively, from a feminist angle, on the impacts of the American Plan.

The American Plan: The U.S. Government’s Forgotten Plan to Lock Up Women and Free the Country from the Scourge of Disease; Stern, Scott W.; Yale University; 2015.

The U.S. Detained ‘Promiscuous’ Women in What One Called a ‘Concentration Camp.’ That Word Choice Matters; Stern, Scott W.; TIME; May 15, 2018.

The Impact of the American Plan; Jorgensen, Jeana; Patheos; January 1, 2019.