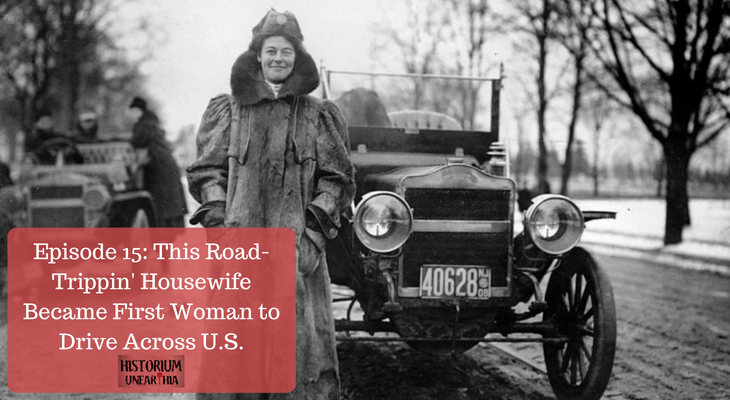 On June 9, 1909, as rained poured down on New York City, a young, poncho-cloaked woman got behind the wheel of a touring car that was a bit tricky to maneuver. Back then, paved roads were far and few between, and there was no air conditioning or roadside service to save the day. But these minor technicalities didn’t stop this fearless adventurer from making history.

Before Amelia Earhart made her legendary flight across the Atlantic, before Naomi James sailed single-handedly around the world, at a time when society was still very much “driven” by men, one road-trippin’ housewife paved the way for women to hit the open road. Her trip would make her the first woman to drive across the United States from coast to coast. Have you ever heard of Alice Ramsey?

For this episode, I had the pleasure of speaking with Tara Hitzig of the Automobile Driving Museum in California, and Emily Anderson who reenacted Ramsey’s trip 100 years after her trailblazing journey.

Alice Huyler Ramsey, The 22-year-old housewife who became the first woman to drive across the country; Anna Hider; Chronicles; March 14, 2018.

The story of the first cross-country road trip by a woman; Megan Turchi; Boston Globe; June 9, 2015.