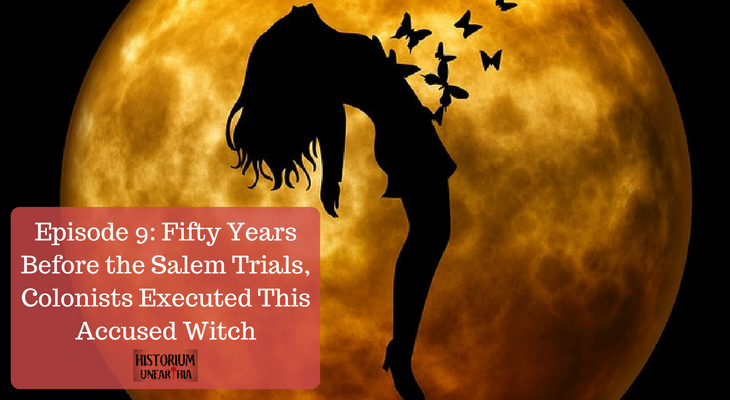 Although the origin of witchcraft remains unknown, from a colonial perspective it was carried to the New World from England. The colony’s English settlers brought with them a strong belief in Satan’s power and a deep hostility toward those who did not strictly conform to the community’s harsh social and personal norms. While Salem, Massachusetts often stands out as ground zero, the witch purge began decades earlier in 1647. Women, of course, were disproportionately targeted. Nearly fifty years before the famous Salem witch trials, a young Connecticut woman was accused of witchcraft and hanged. She was the first of many, but her story has been forgotten. Have you ever heard of Alice Young?

A huge thanks to authors Beth Caruso and Katherine Spada who helped resurrect both Alice’s story and the broader history of Connecticut’s witch trials. Their tireless work is helping to clear the name of Alice Young and the other victims. I’d also like to thank Morgan Kelsey, a 10th generation granddaughter of Young, and Peg Aloi, a media scholar, a practicing witch, and an author dedicated to exploring and discussing all things witchy and pagan in contemporary media.

Please visit the Connecticut Witch Memorial Facebook page to learn more about the efforts to erect a memorial in the honor of those who were wrongfully accused and convicted of witchcraft in Connecticut. You can also mail a donation to:

New England’s Other Witch-Hunt: The Hartford Witch-Hunt of the 1660s and Changing Patterns in Witchcraft Prosecution; Walter William Woodward; OAH Magazine of History; 2003.

In Frightening Times, Witchcraft Rediscovers Its Political Roots; Peg Aloi; The Establishment; May 21, 2017.