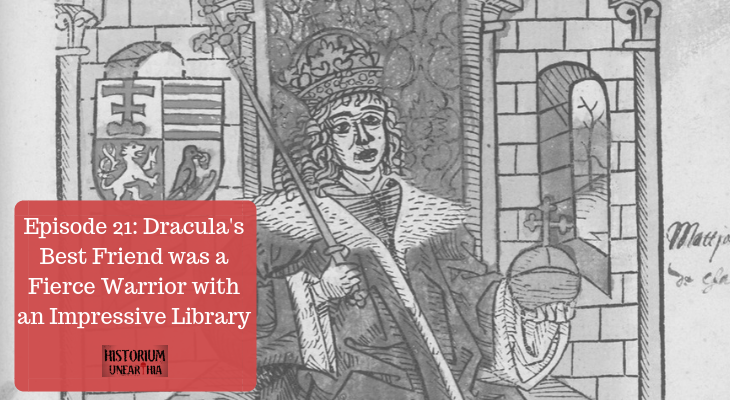 In the Late Middle Ages, the Kingdom of Hungary rose from the ashes, leaving behind a dismal episode in Hungarian history. The mid-15th century soon marked the nation’s Golden Age. At the height of its prosperity, a revered ruler, hailed the Raven King, commanded an eminent presence on the European stage. But, in the end, it wasn’t his conquests or his castles or his culture-forward mentality that made him so remarkable. His legacy may be better defined by his unorthodox relationship with Dracula and his magnificent library. Have you ever heard of Matthias Corvinus?

It was an honor to speak with Joe Hajdu, and an urban and cultural geographer and author of the book Budapest: A History of Grandeur and Catastrophe, and Dr. Katalin Szende, an associate professor in the Department of Medieval Studies at Hungary’s Central European University. Their brilliant insight brought the Raven King back to life, even if for just a moment.

Marcus Tanner: ‘Did you know that Dracula’s best friend was a warrior bookworm?’; O’Brien, Murrough; The Independent; April 20, 2008.

Matthias Corvinus and His Time: Europe in Transition from the Middle Ages to Modern Times between Vienna and Constantinople; Simon, Alexandru, et al; Austrian Academy of Sciences Press; December 7, 2011.

Once the Greatest Army in Europe – The Black Army of Hungary; Gaskill, Matthew; War History Online; May 31, 2018.

Will to Survive: A History of Hungary; Cartledge, Bryan; Oxford University Press; April 19, 2011.