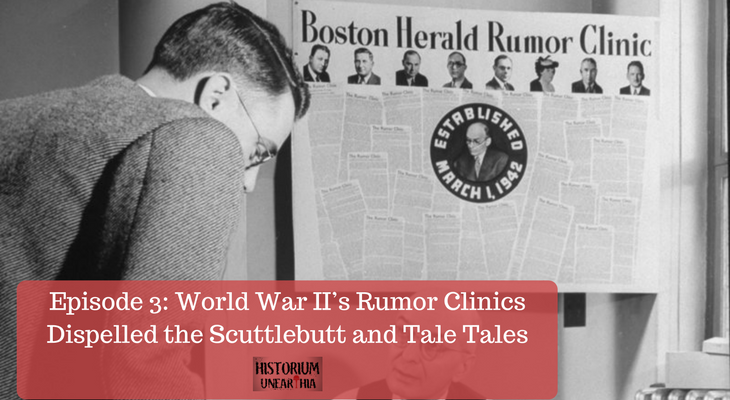 Rumors, like most forms of gossip, are usually rooted in half-truths and outright falsities. Yet, during World War II, these insatiable tidbits of hearsay threatened to undermine civilian morale and even cause unrest within the military community when they nearly spiraled out of control. A network of “morale wardens” tracked down the latest scuttlebutt, and helped refute these tall tales. Have you ever heard of the World War II rumor clinics?

An adaptation of this story originally appeared on Atlas Obscura. Given the rise of fake news and spread of misinformation, I was inspired to expand the piece into this podcast episode.

A huge thanks to Aimee Rinehart of First Draft, a nonprofit coalition to raise awareness and address challenges relating to trust and truth in the digital age, and Professor Cathy Faye, Assistant Director of Drs. Nicholas and Dorothy Cummings Center for the History of Psychology at The University of Akron. Professor Faye wrote the piece Governing the grapevine: the study of rumor during World War II.