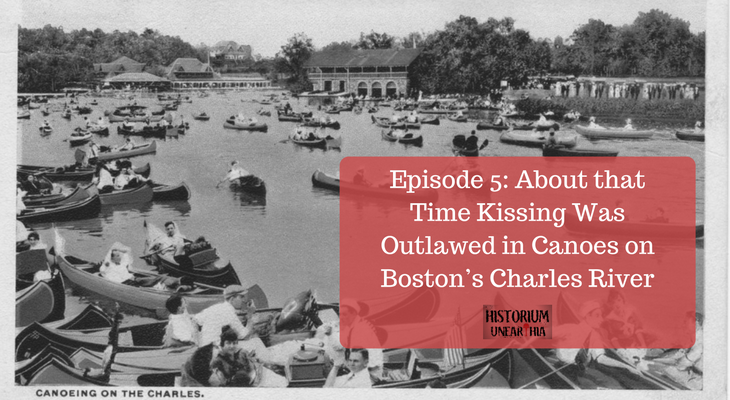 Long before Fats Domino found his thrill on Blueberry Hill or making out in the backseat of a station wagon on Lover’s Lane was hip, young couples took to the water. But they weren’t out there for a midnight swim. They didn’t make a splash or even get wet. In the late 1800s and early 1900s, canoes provided a private escape. Canoodling went on for years in the Boston area. Then, someone let the cat out of the bag, and the innocence of love turned into the scandal of the century. Have you ever heard about the time Boston banned kissing in canoes?

For this episode, I had the pleasure of speaking with Cathy Hurst, a writer and professor who transcribed and annotated a 1905 family diary set in the Boston area, and Clara Silverstein, the Community Engagement Manager for Historic Newton. I’m also grateful to Marcel Danesi, a professor of Linguistic Anthropology at the University of Toronto and author of the book The History of the Kiss, who spoke to the past, present, and, hopefully, future of the kiss.

The Charles River: in the Right Place at the Right Time, Historic Newton, City of Newton, retrieved January 2018.

“Down by the Riverside” in Historic Auburndale, Robert F. Pollock, a booklet published by the Auburndale Community Association, revised edition 1996.